A set of tests are administered to all participants enrolled in CNLR studies to evaluate cognitive and language functions and how these change with treatment.

All participants are evaluated on their ability to learn new material using a Serial Response Time measure developed for CNLR use (modeled after Brown & Robertson, 2007; Brown, Robertson, & Press, 2009). Memory and other cognitive abilities also are tested.

The NAT was developed to examine non-verbal production of canonical and non-canonical sentences, using a set of word cards and action pictures. It is particularly useful for testing individuals with motor speech, cognitive (e.g., attention, memory), or other impairments that preclude ability to perform spoken sentence production tasks, such as those included on the Northwestern Assessment of Verbs and Sentences (NAVS).

The TUF was developed for use with individuals with agrammatic aphasia, a type of aphasia characterized by production of short, grammatically impoverished utterances, with frequent word-finding pauses. TUF focuses on non-canonical sentence structures and incorporates training for both sentence production and comprehension. Importantly, treatment is based on the premise that training underlying, abstract properties of language facilitates generalization to untrained structures with similar linguistic properties, especially those of lesser linguistic complexity. 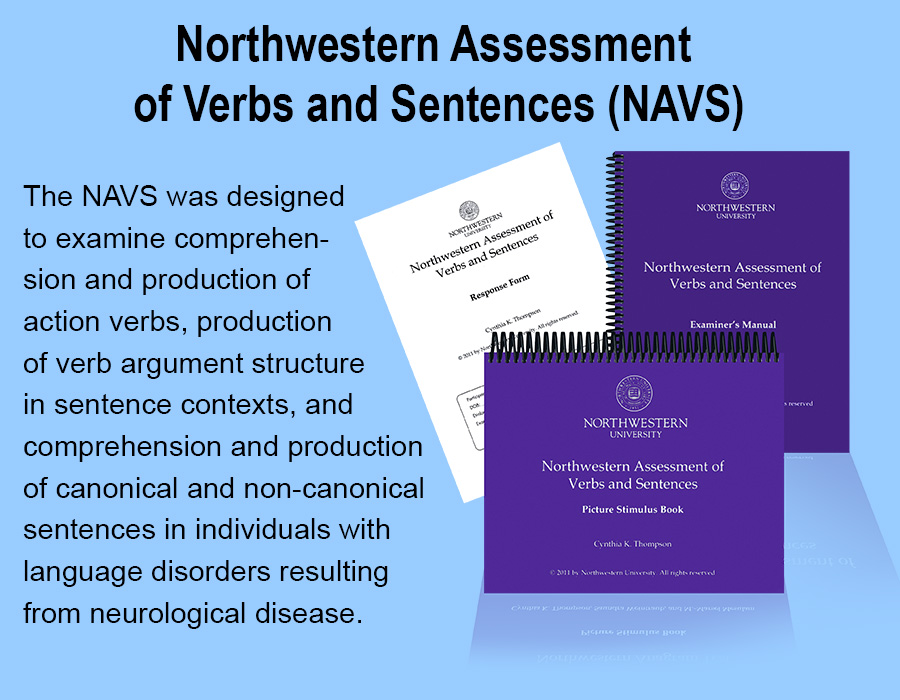 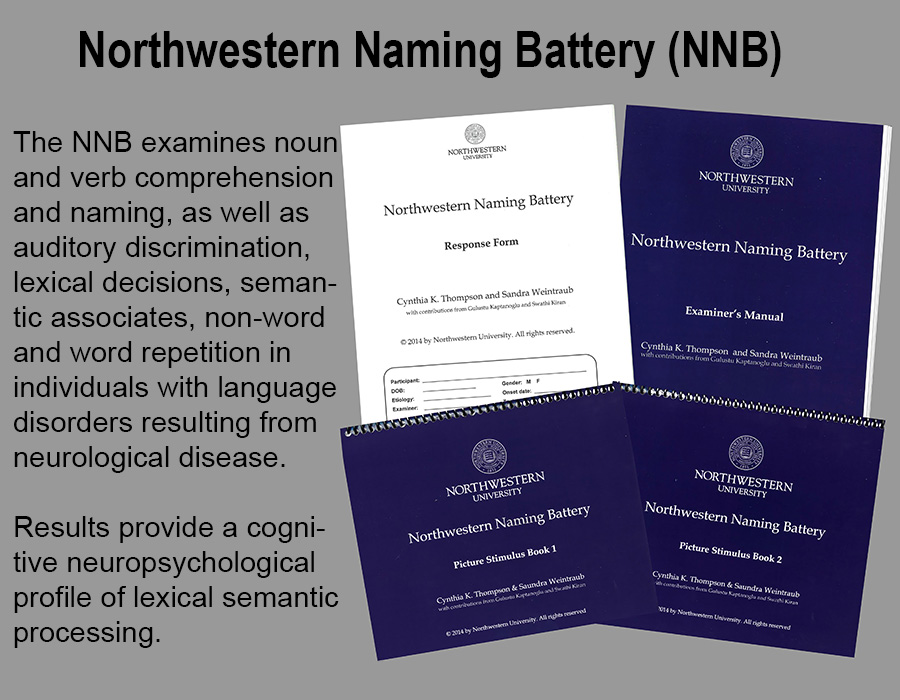 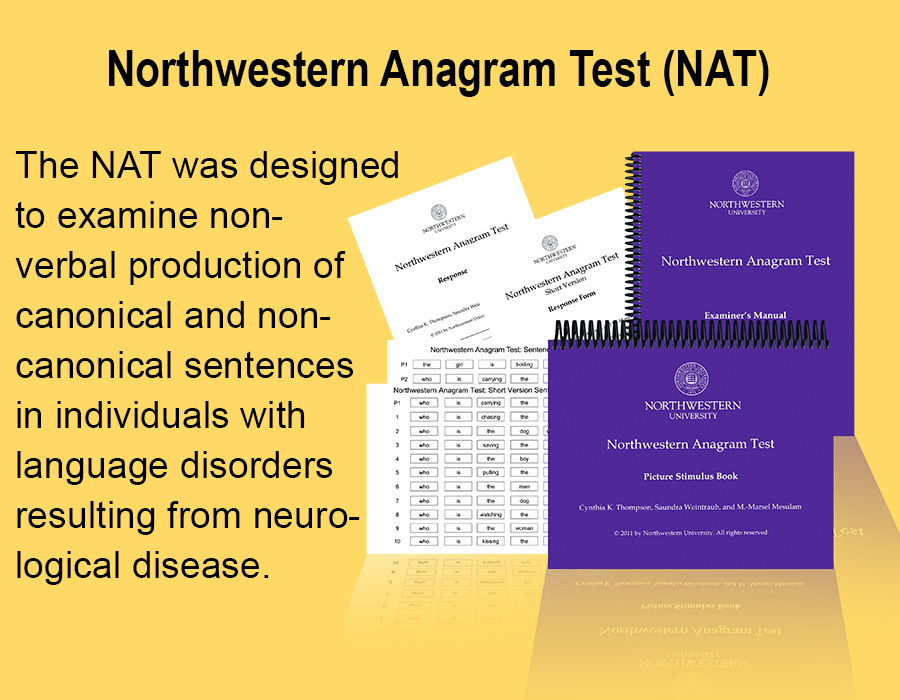 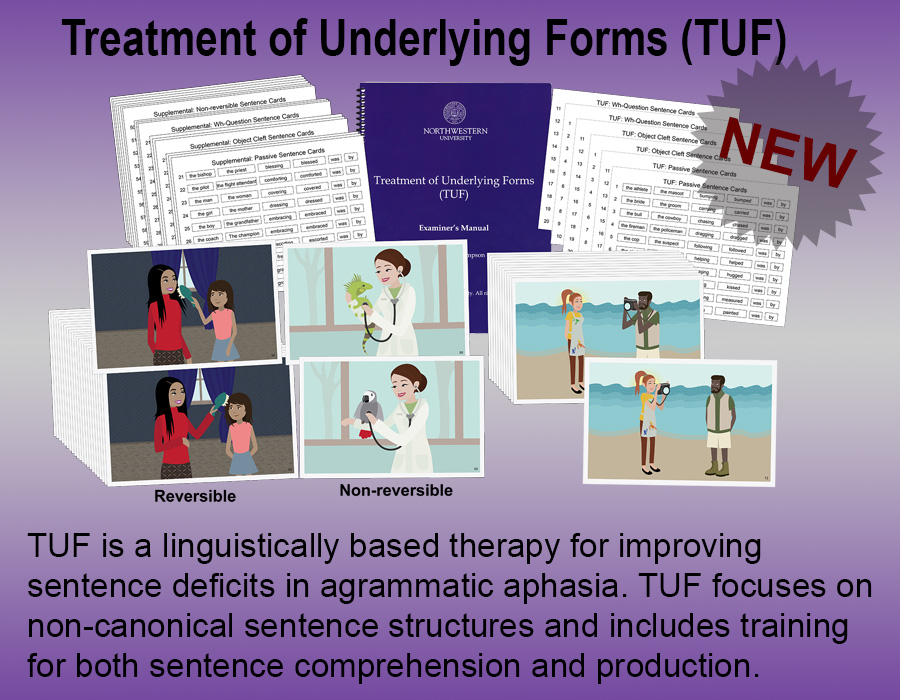 All behavioral and neuroimaging data collected at project sites are evaluated at Northwestern University’s Center for Translational Neuroimaging (CTI), under the direction of Dr. Todd Parrish, to examine models of language recovery. The Neuroimaging data include structural (anatomic and diffusion), functional (task-based and resting state), and physiologic (perfusion). State-of-the-art data processing machinery is used to automatically analyze the data and add them to the project-wide database. These data are used to address specific questions about how the brain recovers from aphasia and the biomarkers that predict language recovery.

Functional MRI (fMRI) is a neuroimaging technique used to map brain activity. This technique evaluates blood flow changes to detect which regions of the brain are activated during various tasks. A method called resting state fMRI is also employed, which does not require participants to perform a task. We analyze brain activity during the resting state to examine how regions of the brain communicate with each other. Both types of MRI data are used to determine changes in the brain activity patterns associated with language treatment and recovery.

DTI is a structural neuroimaging method that is sensitive to microscopic movement of water and is used to examine the white matter (WM) tracts in the brain. The white matter is the wiring that connects the gray matter (the processing part of the brain). DTI allows us to visualize the 3D connectivity of the brain’s WM tracts. DTI takes advantage of the fact that water molecules have limited circulation across myelin, the fatty substance coating our neuron’s axons in the brains. We evaluate sensitivity to myelin thickness to investigate if the treatments we provide have an effect on the WM tracts in people with aphasia.

Perfusion is a measure of cerebral blood flow. CNLR uses a non-invasive method that labels the blood and measures how it is delivered to the brain. The region surrounding the stroke lesion typically has reduced blood flow. The aim of the perfusion measure is to determine regions of the brain that are hypoperfused (under perfused) in people with stroke-induced aphasia and to evaluate whether or not hypoperfused tissue can be recruited to support recovery of language. Results will determine whether or not patterns of hypoperfusion can help predict language recovery.

The study will collect a high resolution 3D image of the brain for analysis and display purposes. In addition, 2D anatomic data that is sensitive to gliosis will be collected using a FLAIR sequence. This imaging can identify regions of the brain adjacent to the stroke lesion that are not normal. Structural measures are correlated with language recovery to determine how the location, size and thickness of cortical tissue may be predictive of language recovery.

We use EEG, or an electroencephalogram, to examine the electrical activity of the brain. We use use Event Related Potentials (ERPs), associated with language processing in healthy and aphasic individuals. Brain waves are recorded as participants listen to sentences.

Eye-tracking is a technique that allows us to follow participants’ eye movements as they listen to or produce sentences. Movements of the eye and language processing are highly connected. Thus, this technique provides a window into how people process language in real time. Eye-tracking is used in our study to determine if, as a result of treatment, people with aphasia show changes in their sentence processing strategies.