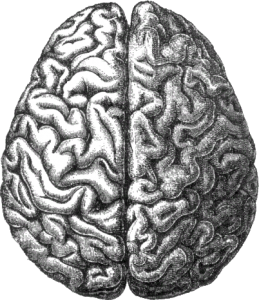 Aphasia is caused by brain damage, affecting theneural networks involved in language processing. Stroke is the leading cause of aphasia, but it also may result from brain tumor, traumatic brain injury, or other diseases. Onset of language impairment is sudden (e.g., during or immediately after an event). Medical attention should be sought immediately.

Aphasia also may result from neurodegenerative disease of unknown etiology. The onset of Primary Progressive Aphasia (PPA) is gradual and only language abilities are affected (in early stages). People with this form of aphasia initially show mild deficits in language comprehension and/or production, which increase in severity over time. Center researchers collaborate with Northwestern’s Cognitive Neurology and Alzheimer’s Disease Center (CNADC) on studies examining language decline in PPA and potential treatments for it.

Language is processed primarily in the left hemisphere of the brain, in the majority of people.

Several regions in the left hemisphere, and the connections between them, are important for language processing. These regions include gray matter within the frontal, parietal, and temporal lobes of the brain, which are interconnected by white matter tracts to allow information flow between them. To understand spoken language (i.e., discourse, sentences, words), flow of information from the ear to the brain is necessary. Once information reaches the primary auditory cortex (in the temporal lobe of the brain), it then is distributed throughout temporal and parietal regions of the brain to compute meaning.  Similarly, to understand written language (e.g., read words and sentences), visual information passes from the eyes to the primary visual cortex (in the occipital lobe of the brain). From there, visual information also connects with temporal and parietal regions for computation of meaning. 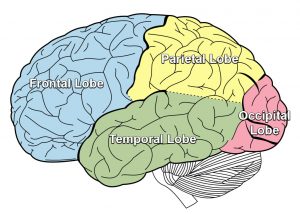 Spoken language involves these same regions of the brain as well as those needed for production of words and sentences. Rather than computing what is heard or seen, as in language comprehension, production involves computing what we want to say (i.e., the message). The message passes to regions of the brain (primarily temporal and parietal areas) that store words associated with the message, which trigger processes for putting the words into a grammatical sentence frame. Production mechanisms also are triggered, primarily via connections to the frontal lobe, to allow speech production.